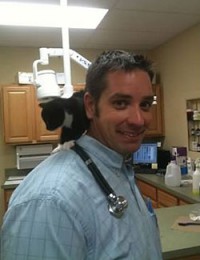 Dr. Jeff has been practicing with us since 2001, but has been a significant member of our staff since 1995 when Dr. Gregg hired him for seasonal work. Dr. Jeff received his Bachelor’s Degree in Biology from Hiram College in 1997 and his DVM Degree from The Ohio State University in 2001. In 2006, he became a minority owner of the practice. In addition to his general practice duties, Dr. Jeff’s strengths are in orthopedics and performing a specialized Tightrope Procedure for dogs with cranial cruciate ligament damage. He is also instrumental in the development of our emerging Stem Cell Program. Jeff and his wife, Megan, have three sons—Joe, Jon, and Jared. They also love their Brittany spaniel named Bella, King Charles Cavalier Spanniel named Radar, and their cat named Rollie. As a family, the Janzigs enjoy all activities in and around the water, including water-skiing, fishing, and boating.