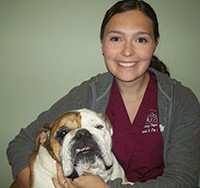 Dr. Rachael has been practicing with us since 2012. She literally grew up in the practice, as she was part of the scene and helping out since childhood. She earned her Bachelor’s Degree in molecular biology from Grove City College in 2008, and her DVM Degree from The Ohio State University in 2012. Her veterinary interests include canine and feline preventative care, behavior, and physical rehabilitation. She is also involved in our emerging Stem Cell Program. She attended the Canine Rehabilitation Institute in 2013 and earned the title of Certified Canine Rehabilitation Therapist. Dr. Rachael supervises our Physical Rehabilitation Program, which is designed to help dogs after surgery. She also enjoys her work in conditioning canine athletes. Dr. Rachael and her husband, Steve, have three dogs: an English bulldog named Caroline and two French bulldogs named Sawyer and Prada. They also have a domestic short-hair cat named Remington. Dr. Rachael enjoys cooking, traveling, and spending time with her family.